Indoor Air Molds and Bacteria in Buildings, A Case Study. 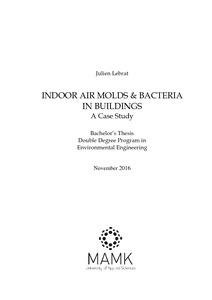 Unlike air pollution outside, most publicized, the indoor air remained relatively unknown until early 2000. Yet, we spend on average in temperate climate, 90% of our time in closed envi-ronments, and a majority of that time in the home: home, work premises or to receive the pub-lic, means of transport, in which we can be exposed to many pollutants. The nature of these pollutants depends on particular characteristics of the structure, activities and behaviors (to-bacco, paint, etc.) and these pollutants can affect the health and well-being. The quality of indoor air is therefore subject of concern for many years and has emerged as a major public health issue.

Mold development and production of mycotoxins associated in some collective and individu-al buildings is likely to cause diseases, including allergic (rhinitis, asthma, skin and mucosal allergies). These dangers are of concern to susceptible populations (children, patients whose immunity is depressed, workers, etc…).