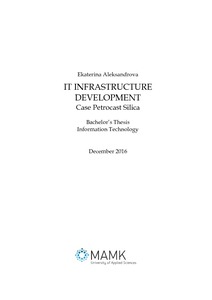 The scope of this study was to investigate a network topology and devices` configurations in a living environment of a small business. Other aim of this thesis was to look for potential or existing problems with security, connectivity or overall usability of the network and suggest a list of improvements,changes and technologies that may help to resolve the troubles that the company was facing. The study was carried out with the help of various tools, manuals and software like PacketTracer and network handbooks to gather intelligence about the existing problems of the enterprise and the troubles that might happen in the nearest future and damage the network or the data stored on the local devices.
The results revealed a scope of certain issues like a topological vulnerability of the network, poor network devices` configurations and violations of basic security and safety rules on the workplace. The study suggests changing the network topology, adding new configurations like DHCP, VLANs, ACL, PAT etc. The study also provides the readers with a set of security measures that can be implemented to both network and human environments of the enterprise.