Peer-to-peer Services in the Field of Accommodation: Finland vs. Latin America 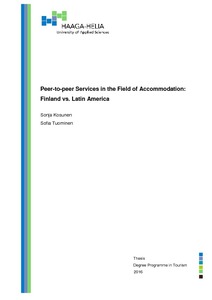 This thesis focuses on peer-to-peer services in the field of accommodation, more closely Airbnb. The thesis aims at researching the differences of the use of Airbnb in Finland and Latin America with the main focus on Mexico. The thesis is commissioned by SMAL (Association of Finnish Travel Agents).

The thesis will consist of eight parts. The first part presents an overall introduction of the topic, aims, commissioner, methods and hypotheses. The second part presents the sharing economy phenomenon itself. The third part focuses on presenting different types of accommodation and taking a closer look to Airbnb and other similar peer-to-peer services. In the fourth part, an introduction and analysis of the research countries and cultures, as well as Airbnb’s popularity and situation in each country are presented.

Lastly, the final conclusions and suggestions for future are presented. The results show that Airnb is more common among Finnish people and not everyone is aware nor tried Airbnb. However, many respondents showed interest towards Airbnb even though they had not used it before. Most of the respondents who have tried Airbnb belong to the younger generation, which is not surprising since young people are more familiar with technology and all the new apps and trends. Additionally, youngsters are usually budget travellers.

People are not willing to give up hotels entirely, but they still expect to have several options when choosing accommodation. There should always be something that will challenge the already existing markets.

Although Airbnb has been succeeding well, it still should increase its visibility. For companies, it would be beneficial to allow the employees to stay at Airbnb accommodation during business trips. In some companies, this has already been introduced, but more widely companies are still preferring hotels.