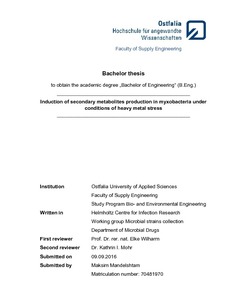 No studies have been performed so far, which would deal with induction of bioactive secondary metabolites of myxobacteria by exposure to high concentrations of heavy metals. Considering the fact that this approach has been tried with other groups of antibiotic producing microorganisms to activate sleeping gene clusters, and promising results have been obtained, this study was performed to investigate the issue with the focus on myxobacteria. A number of type strains from different myxobacterial groups were taken and the range of tolerance towards selected heavy metals (iron, lead, cobalt, copper, zinc and nickel) was tested on full agar media and in full liquid media. Additionally, a number of myxobacterial strains were isolated from heavy metal contaminated soils and the same tests were performed. Strains from the both test groups, which showed relatively high tolerance, were selected and their metal-spiked cultures were cultivated. The produced secondary metabolites were analyzed and their profiles and amounts were compared to those of the not metal-spiked cultures. No unknown myxobacterial metabolites were found in metal-supplemented cultivation broth. However, secondary metabolites extracts of some strains, grown in the presence of a metal salts, showed increased production of some known myxobacterial compounds, as well as the presence of some unidentified derivatives. Additionally, a putative new antibiotic metabolite of Labilithrix luteola was discovered, which was present both in metal-spiked and not metal-spiked cultures. This study suggests that increased production of certain myxobacterial secondary metabolites could be a response to metal-induced stress, and the strategy might be applied to other myxobacterial strains.