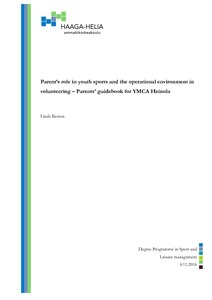 Sport club environment includes parents in the process a lot. Parents have a huge influence on the on-going actions in sport clubs. Parents are the running force, together with the sport club’s administration. Parents make their child’s hobbies possible and are in a great role to support them.

The finished guidebook for parents of YMCA is attached at the end of this thesis. The club can use the product as a brief introduction for the new parents involved in youth sport. In the future YMCA Heinola can update the information collected and change the facts as the operational environment changes.