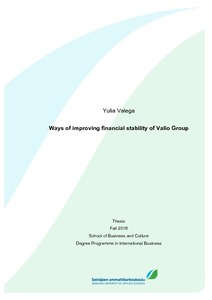 The study revealed that Valio Group has a normal level of financial stability. For maintenance and improvement of the current level of financial stability and solvency of the Valio Company the following measures were recommended for implementation:
- To Increase equity to assets ratio;
- To Increase share of the working capital financed by owner’s equity;
- To strengthen control over the debt collection;
- To decrease cash in hand and at banks share in the current assets of Valio;
- To strengthen control over stocks’ share in the assets of the company.