The Role of Mental Health Nurses in the United States : A literature review 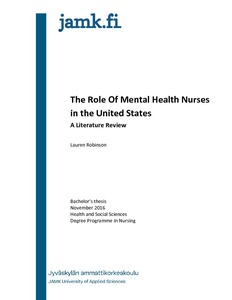 Mental health services in the United States are increasingly facing shortages in the
availability of qualified health-care providers such as psychologists, psychiatrists, and
general medicine physicians. Graduating physicians are increasingly choosing to become
specialists rather than practice as general medicine providers. This places strain on rural
areas, where psychiatric specialists are in short supply, and most patients rely on
generalized medical providers to meet their mental health care needs.
Thus, it appeared prudent to examine the roles and responsibilities of the psychiatric nurse
in the United States, as the World Health Organization has increasingly emphasized the
importance of undergraduate health care professionals in meeting mental health care
demand on a primary level. A preliminary search of the literature revealed that a definition
of the role of mental health nurses is difficult to articulate and has no broad consensus.
A review of the literature clarified the role of the mental health nurse in the United States.
Information about the qualifications of MHN’s were sought, and the scope narrowed to
MHN-RNs. Findings indicated that registered nurses in mental health practice: utilize the
nursing process in the planning, implementation, and evaluation of psychiatric care; use the
fundamental basics of the psychiatric interviewing process to collect vital information; and
practice the artful use of self in the therapeutic relationship in order to promote positive
patients outcomes through the usage of therapeutic communication.