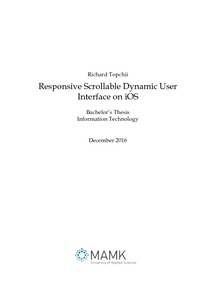 The purpose of this thesis was to investigate new ways of programming the user interfaces on iOS, so that they would satisfy both the performance requirements and would be convenient to use for developers. Nowadays the interfaces in mobile apps have become very complex. On the other hand, users expect apps to be performant and reliable. The developers need a way to quickly introduce new changes in the app without the need to change a lot of code. The major companies, for example, the Facebook, the LinkedIn or the VK are designing own frameworks to tackle these challenges.
I will propose the framework for the declarative layout definition which will also have acceptable level of scrolling performance. The thesis contains both the architecture of the framework as well as technical details. The proposed solution will be evaluated by building fully functional social networking iOS app and distributing it using the App Store platform. By looking at the analytics data I will evaluate reliability of the proposed framework.
The results revealed that the proposed solution greatly improves developers’ productivity when working with layout. The scrolling performance level is acceptable and very high, but there is still a small room for improvement. The solution work stable on a large scale showing more than 95% of crash-free users in a social networking app.
I consider the proposed framework ready for use in a production environment. However, I recommend improving performance level of the framework. Another direction for the improvement can be the introduction of the advanced interactions, for example, videos that start playing automatically while the user scrolls the feed.