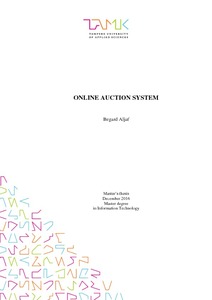 The objective of this thesis was to develop the Online Auction System in Iraq. The main reason behind implementing this project was the people needed a system where they can make the auctioning through the internet easily and reliably. The system was implemented to replace the tradition auctions by online auction, due to the fact that in the epoch of the internet and e-commerce online auction had an important role in business and it had been popular means of selling goods.

The system was implemented by using most well-known programming technologies and languages. A lot of time was spent on solving authentication problem. It was very important to develop the system that the users of the system trust each other during buying and selling. The client side was needed to be friendly user interface CSS entirely used with HTML and JavaScript. The server side program was needed for storing all required data into the database by using MySQL database with PHP which they easily can retrieve and store the data into the database through SQL queries. It was required a widely knowledge and skills of the system design and programming languages which greatly helped to implement the web application for the need.

The implementing this project was successfully done. Adding more features to the system will be implemented in near future.