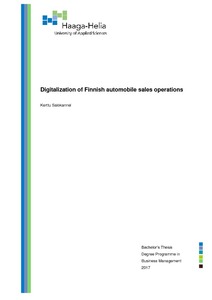 The thesis is partly based on Media Project (November 2015-May 2016) where our research team studied the impact of digitalization on Finnish news media and collected research data for updating the news media revenue model to a form in which digital micro products alongside the core product operate as an important source of income. After the project ended, no suitable subject for further research was found. However, in a subsequent meeting with the commissioning party, centrality of digitalization on automobile industry was emerged as a key topic of discussion. It was made clear that the changes digitalization is enabling are revolutionizing the current market and its environments. We chose to study this change and our research in broad terms focuses on the changes digital revolution has caused on the industry, its business model and surrounding environments.

The objective of the thesis is to form a clear understanding of the changes digitalization has caused in the business model (finances, infrastructure, customers and value proposition), sales promotion processes, engagement with the customers and distribution channels of automobile sales. This objective is achieved by answering research problem and four investigative questions. Table 1 introduces the overlay of the research approach with the chapters of theoretical framework, research questions and results related to each investigative question.

The research is based on both primary and secondary data collecting methods. Primary data collection method is qualitative (in-depth interviews) with experts on marketing (Autotalo Laakkonen, VV-Autotalot, Delta), commercial activities (Fokus Media) as well as development of the industry and its sales processes (AutoBild) in December 2016. The theoretical framework is established through a profound literature review on relevant books, articles, reports and other online publications. Main literature and key models and concepts are specified in more detail in the section 1.3 Methodology.

Main findings conclude that in the future car is much more than a means of transport and the whole business must be redefined: “Motoring is a sense, the car only an intermediate piece of freedom”. Locality, political and environmental changes as well as Finnish climatic conditions are very strong elements affecting the industry even though changes are often global. Major changes can be divided into four categories (concept of mobility; urbanisation; choices of power, digital advancements), but the order and time frame of these changes is uncertain and is dependent on several interrelated factors. Rest of the main findings in relation to research problem and investigative questions can be found in section 6.5.

References are made using the Harvard model with Mendeley reference manager. Empirical research and some parts of the theoretical framework was done in co-operation with a graduate student Ulla Ruuskanen, who is continuing the research in the spring 2017 in her master’s thesis.