Gender Microaggressions in Low-Context Communication Cultures : A Perceptual Study in the Context of Higher Education Institutions 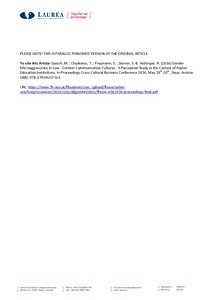 In recent years the concept of microaggression has increasingly spurred the academic debate resulting in a number of classifications to express its several forms. This contribution seeks to shed light on gender microaggressions as they occur in higher education settings and discusses a number of perceptual aspects from an interpersonal, systemic and environmental level. It is attempted to relate these brief and commonplace verbal and behavioural indignities to the perceived level of hostile and derogatory insults towards the investigated members of the stereotyped academic group. In doing so, both overt and subtle daily acts of discrimination are identified in the form of microassaults, microinvalidations and microinsults and the extent to which women in academia face particular microaggressions is explored. In particular, it is looked at women’s experiences that pursue a scholarly career in low-context communication cultures such as Austria and Finland. It was found that the largest amount of microaggressions occurred in terms of microinvalidations which classify female gender experiences as non-existent insofar that perpetrators invalidate or negate realities of women by pretending that such aggressions have never happened or that women are just reacting in a hypersensitive manner. While it is recognised that a low-context communication culture is defined along the lines of explicit and non-personal communication styles, there are still a number of differences as to the extent of perceived gender microaggressions in both countries. In Austria - considered as a masculine country and expressed as such by the Finns - females seemed to be exposed to more microaggressions than their Finnish colleagues. Also the identification and elimination of such inequalities appeared to be a greater issue in Finland than in Austria. This cross-border contribution explores perceived factors for negative stereotypes and discriminatory acts against women in academia and relates them to the societal and institutional context of the investigated countries.