Observing and Estimating the Switching Intentions of Existing Consumers towards New Ethnic Indian Restaurant in Helsinki. 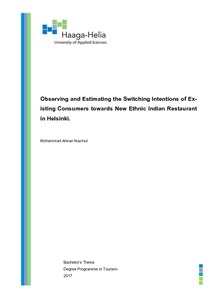 The study was undertaken to investigate the restaurant switching intention among existing customers of ethnic Indian restaurants in Helsinki and to explore implications of the existing consumers’ switching intention on new ethnic Indian restaurants. It has practical significance for both existing and to-be-opened new ethnic Indian restaurants in Helsinki in understanding consumers’ restaurant switching behaviour and in formulating strategies to retain/attract consumers and overall marketing strategies. The Push-Pull-Mooring (PPM) migration model of service switching by Bansal et al. (2005) is used in the study to investigate the switching intention. According to the model, the combined impact of push, pull, and mooring variables creates switching intention. Where push factors push customers away from their current service providers, pull factors pull/attract them towards alternative service providers, and mooring factors play moderating role with push and pull factors as well as affect switching intention directly. Following the PPM model of service switching, a theoretical framework for the study was developed using the most relevant push variables (i.e. food quality, service quality, and price), pull variable (i.e. alternative attractiveness), and mooring variables (i.e. attitude towards switching, social norm towards switching, and variety-seeking tendency). A quantitative survey was conducted among a sample population of 64 respondents seen coming out of four different ethnic Indian restaurants in four different locations of Helsinki. The findings from the survey were interpreted as per the groundings of the PPM model. The findings revealed that 45.3% of the existing customers have positive switching intention, which was assumed to be the product of the combined impact of the push, pull, and mooring variables selected for the study. Among the push variables, the findings revealed that ‘service quality’ plays the dominant role in creating switching intention followed by ‘food quality’ and ‘price’. It was recommended that any new ethnic Indian restaurant should exclusively consider the implications of the push factors into their overall marketing strategy towards existing customers since the impact of the push factors could be influenced or controlled to some degree by the restaurants as these factors are directly related with the operations of restaurants. On the other hand other factors are related with the customers’ cognitive and other psychological processes over which the restaurants has no direct control.