Finland as a Film-Induced Tourism Destination for Chinese Outbound Tourists 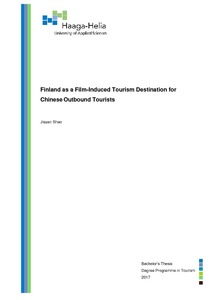 A new form of cultural tourism called film-induced tourism has developed in the 1990s as a new special travel form. Research shows that film can have a strong influence in tourist decision-making behaviour and films do not only provide short-term tourism revenue but long term prosperity to the destinations. In recent years, the number of Chinese visitors has increased rapidly in Finland. Therefore, the purpose of this paper was to explore the poten-tial of Finland as a film location and the opportunities of using Chinese movies and televi-sion programs as a marketing tool to promote Finland as a tourist destination in Chinese market.

The paper was designed as a research-oriented thesis. It started with a theoretical frame-work of film-induced tourism by reviewing previous research and successful case studies in order to analyse the phenomenon of film-induced tourism in a global context. The following chapter was to explore the current status of tourism in Finland and its potential to be a film location. Factors which attract Chinese filmmakers go abroad and various existing exam-ples were investigated to strengthen awareness of the influences by film-induced tourism.

In the empirical part, research was done with an online survey on Webropol in December 2016 in form of a questionnaire including both multiple choice and open ended questions. There were 130 responses of Chinese participants from varying age groups collected and evaluated. The aim of the research was to understand travel behaviour of Chinese out-bound tourists and their attitudes towards film-induced tourism in Finland.

The data were analysed in detail by using charts through the features of Webropol. It shows that most of the participants are very interested in the film industry, however only 77 out of 130 respondents have heard about film-induced tourism, and only 55 of them already had the experience of travelling to a film destination. As a result, film-induced tourism is a new trend and still has space to improve in the future. In addition, other tourist destinations in Finland besides Helsinki were not familiar to many respondents according to the answers.