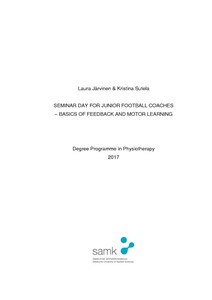 In the last century football has become the most popular sport in the world. As of 2006 there were over 200 million players worldwide, including athletes of both genders, and all ages. According to the Fédération Internationale de Football Association (FIFA) the number of youth players had increased by seven percent from 2000 to 2006. With the increase of youth players, many junior football coaches are parents or volunteers from the community. They often lack the proper training to ensure optimal learning and growth for youth in the sport.

The aim and purpose of this thesis project was to give junior football coaches, through a seminar day, basic knowledge of motor learning along with the confidence to give appropriate feedback to their players. In order to achieve this, research and observa-tions of three junior football team training sessions were done. By combining what was seen at the training sessions and what was found through research, the content for the seminar day was decided. The seminar day consisted of both a theory and a prac-tical portion. The discussion topics for the theory portion were feedback, motor learn-ing, parent/coach-child/athlete relationship, and self-esteem. After the theory, different ways of giving feedback to ensure affective motor learning, were carried out in prac-tice.

To conclude the seminar day, the coaches were given a feedback questionnaire. From their feedback it became apparent that the day was eye-opening for the coaches, and they left with new information. In conclusion, the feedback from the seminar day in-dicated that the aim and purpose of this thesis project were achieved. However, the coaches expressed the need for further education, possibly from physiotherapy stu-dents.