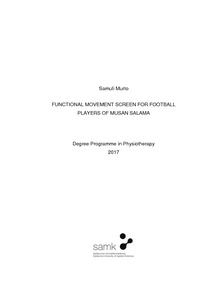 The purpose of this thesis was to assess movement patterns by performing the Functional Movement Screen (FMS) protocol for football players of Musan Salama 2 nd division team. The thesis was done in cooperation with the first team of Musan Salama RY. The practical part of this thesis was done as a quantitative study examining the muscle balance of the test subjects. The Functional Movement Screen was conducted on fifteen players of the team. The scores of the screening were recorded and analysed using Microsoft Excel. The focus of the analysis was to compare the test results with the hand and leg dominance of the participants.

The results and conclusion of the thesis cover the outcomes of the study. The analysis with the Excel Spreadsheet displays that the football players have movement dysfunctions and asymmetries based on the Functional Movement Screen. Some of the dysfunctions recorded in the tests were compensatory movements, limited range of motion, limited balance and movement asymmetries. Correlation between the hand and leg dominance of the athletes was also discovered in some of the tests.

Through these results, the coaches and physiotherapists of the team can design the physical training of the players according to the dysfunctions discovered in the tests. The players were also educated about the effects their FMS score can have on their level of risk to be injured.