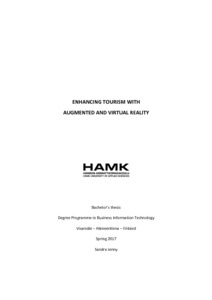 Augmented and virtual reality are on the advance. In the last twelve months, several interesting devices have entered the market. Since tourism is one of the fastest growing economic sectors in the world and has become one of the major players in international commerce, the aim of this thesis was to examine how tourism could be enhanced with augmented and virtual reality. The differences and functional principles of augmented and virtual reality were investigated, general uses were described and devices were examined, compared and selected. Interviews with travel experts combined with examination and trials of augmented and virtual reality applications, at the biggest travel fair in northern Europe, were done to investigate todays potential usage of AR/VR in tourism. The critical part states the appropriate devices to enhance tourism with its reasoning’s. By reference to these findings, a business case was developed, the case study was specified and a suitable business model was designed. As the tourism market was considered a mass market and many people already own their own smartphones, the devices Samsung Gear VR, Google Cardboard or just a smartphone are recommended to enhance tourism with AR/VR. On that basis, the business idea JOIN THE VALK was created, a travel app which embraces the advantages of AR and VR. It guides the tourist with AR and provides information with AR, VR and audio. Furthermore, it provides riddles to get rewards like reduction on entrance fees for museums or discounts in restaurants. The app also helps to recognise other customers in the AR mode to meet and share recommendations or just improve language skills. This thesis is aimed at people who are interested in starting up a new business in the sector of tourism and travel using augmented and virtual reality.