The Carneval of the Animals : an iPad App to Support Interaction 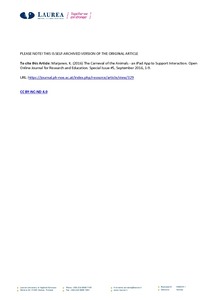 Interaction sets the focus for this paper, observed through a project on “The Carnival of the Animals” app for the iPad. The interpretations of a small child’s playful interaction behaviour with the App 1) as investigated by early childhood teacher students – and 2) via the learning results gained as an understanding of interaction behaviour created on the basis of the current study project. The aim was to support the students’ professional identity development with the interaction experiences during the family visits included in the study protocol. The project was performed as group work and supported with a basic theory and some supervision during it. The aims for the students were two-fold: learning about the interaction behaviour of a child, and learning about doing research. These were used as tools for the professional development. Five students, one of each group, were interviewed six months after the project. Despite of the challenges especially in the beginning of the project, a clear finding of the professional development and an understanding of a child was stated. New ideas for teacher training as a ground for development can be considered for the future needs.