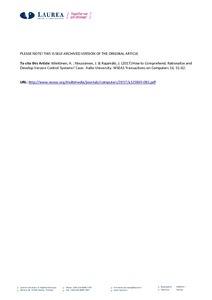 The topic of the study is topical, as the various universities and non-governmental companies are looking for ways to improve their processes to gain budget savings. This study will debate on the development, comprehension and rationalization of version control system (VCS) usage at Finnish Aalto University. The applied research methodology is a multiple case study analysis. The study has been conducted during a VCS project, which aimed to clarify the usage of VCS at Aalto University by providing a centrally managed system instead of multiple systems which are currently used among the departments of Aalto University. Objective of the study is to examine the possibility to substitute current systems to a one, centrally managed system and clarify the steps important to a VCS acquisition project and suggest improvements to the process of the project. The project itself was conducted at the premises of Aalto University from 2015 to 2016. The most important result is that the reduction of overlapping systems will significantly improve the usage of the system and the local support provided for the system. At the same time, reduction will also offer a possibility to focus on the development of systems instead of just focusing on administrating multiple systems.