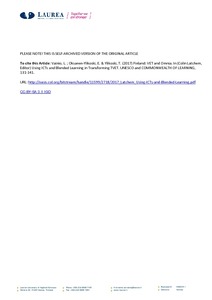 Until the economic crisis of 2008, the growth of Finland’s GDP was faster than in the EU in general. During the last few years, however, the economy has been in recession. While this has led to the need to reduce public sector costs, it has also been a driver for overhauling the education system. The country has few natural resources and so has long emphasised the importance of maximising educational opportunities; its best capital is knowledge capital, as shown in its highly skilled labour force.

There are no tuition fees in the Finnish education system and the publicly funded comprehensive school system has no selection, tracking or streaming of students. The higher education system is divided into universities and polytechnics (also known as universities of applied sciences). The Education Index, published with the UN’s Human Development Index in 2008,1 lists Finland as one of the highestranked countries in the world in terms of education. Finland has also consistently ranked high in the PISA (Programme for International Student Assessment) study — and at one point was ranked first — prompting widespread international curiosity about its formula for success. The Finnish Ministry of Education attributes its success to the innovative basic education provided to all school-aged children, highly competent teachers and the autonomy granted to schools.