Civilian and Military Personnel in CSDP Missions and Operations 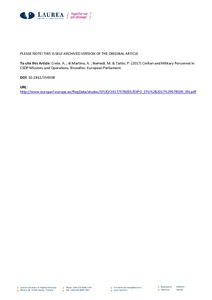 Under the framework of the CSDP, the EU has launched some 35 missions and operations since 2003 bringing stability, rule of law, and security sector reform to countries as diverse as Afghanistan, the Democratic Republic of Congo, Kosovo, Iraq and Ukraine. About 7000 personnel are currently servicing in the 16 on-going operations, ten civilian and six military.

As per the latest EEAS data available, personnel servicing in civilian CSDP missions amounts to a total of 2467 units of which 1748 male and 719 female. Such total includes both seconded and internationally and locally contracted staff (respectively 858 seconded personnel of which 21 from third States, 405 internationally contracted and 1204 locally hired).The latest figures related to military personnel serving in CSDP operations indicate instead a total of about 3409 individuals.

Civilian missions can be broadly clustered into three categories based on their mandate: monitoring, strengthening and executive missions. Strengthening functions mainly relate to capacity-building activities in the rule of law area. Monitoring functions consist in the observation of the performance of relevant host country institutions (e.g. police services, military forces and civilian authorities) and their personnel or of the implementation of an agreement (e.g. a truce, a ceasefire or a peace treaty). Executive functions relate to the carrying out of certain tasks in substitution to the recipient state. The only on mission currently performing such executive functions is EULEX Kosovo. Military operations contemplate mandates spanning from executive functions with potentially coercive tasks to capacity building activities. Only one of the 6 on-going operations (green in the map) was established in 2016, EUTM RCA with a mandate to “support the CAR authorities in the preparation and implementation of the upcoming Security Sector Reform [...]”.