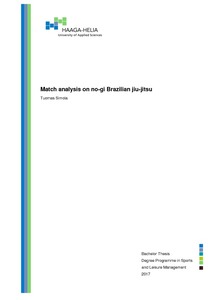 Matches (subjects) analyzed are from No-Gi Brazilian Jiu-Jitsu World Championships 2015. All of the black belt matches from each weight category both men and women are ana-lyzed. Observations were gathered on Excel spreadsheet and results were analyzed by statistical analysis program SPSS. The literature review is done on the history of the sport, the rules of Brazilian Jiu-Jitsu, match analysis and statistical analysis.

The most usual type of match ending in no-gi Brazilian jiu-jitsu is a submission (47,7%). Vic-tory via points (33,6%) and advantages (12,5%) are also common. A submission rate in women category is remarkably higher than in men categories.