Desalination In Water Treatment And Sustainability 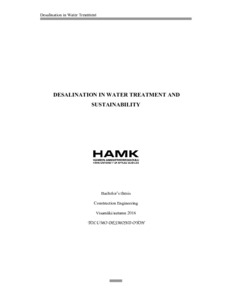 The purpose of this Bachelor’s thesis was to introduce different desalination technologies in solving water scarcity in countries where access to safe drinking water is limited, due to increasing population growth, industrial activities and agriculture. This thesis covers and explains different desalination technologies in dealing with water problems in different countries and the best suitable methods. The thesis was commissioned by HAMK University of Applied Sciences.

The thesis also focuses on the Economic and Social Commission for West Asia (ESCWA) member countries were access to water is limited due to scanty rainfall and dry lands. Desalination technology has played a significant role in solving their water scarcity in the region leading to sustainable development. A case study of Taweelah power and desalination plant in Abu Dhabi was explained providing detailed information.

As a conclusion, it can be stated that desalination in water treatment and sustainability is a significant factor in the world today, because the future of water supply requires adequate sustainability to be able to effectively supply and support the world’s increasing population. For the Taweelah power and desalination plant project, a suitable re-design of the intakes and outfall layout should be adjusted. The outfall can be an off-shore pipeline instead of its location onshore.