Some quality factors of river water 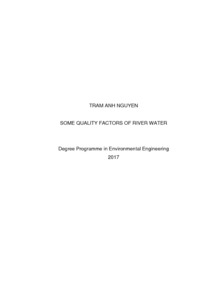 The purpose of this thesis was to study the essential factors, which determine the surface water qualities, more emphasizing Eurajoki river water. Particularly, this thesis focused on the humus removal and optimization of different coagulant chemicals: Fe2(SO4)3.6H2O, FeSO4.6H2O and Al2(SO4)3.3H2O. Chemical Oxygen Demand – COD and Biological Oxygen Demand – BOD measurement procedures were performed in order to accompany the studied goals. In addition, electric machinery measurement AAS –Atomic Absorption Spectroscopy and UV Spectrophotometer were used for Iron and Phosphorus content determinations respectively. Eurajoki River is one of rivers which have been studied about water qualities in Satakunta region. Content in thesis hopefully contributes to future restoration programs. All experiments were conducted in SAMK chemistry laboratory during October and November 2016.
According to experiment results, iron (III) based coagulants are most efficiency in coagulation and flocculation process, which gives clearly visualization and CODMn numbers. On the other hand, modified BOD method used lactose bacteria organic matter as decomposer demonstrates its competency in raw water.