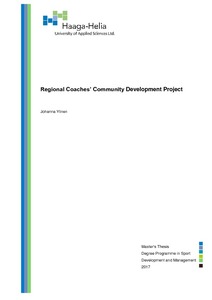 The target of this thesis project was to implement a model of how to organize regional coaches’ community action and investigate how it could be developed. The Finnish Olympic Committee has assigned regional sports academies to organize the action. The action is supposed to be regionally oriented; local circumstances, premises and objectives provide the basis for the action. The idea behind the coaches’ community is to give coaches of various disciplines a chance to meet each other on a regular basis to share their knowledge and experiences. The ultimate objective is to help coaches to learn, increase their knowledge and improve the coaching practises in Päijät-Häme.

This thesis was a development project of the coaches’ community action in Päijät-Häme sports academy in 2016, in which action research related methods were used. The idea was to learn something from each step and to investigate how to improve the action in the future, as it will be one of the focal points of the organizing body also in the year 2017. The action included mainly meetings about changing themes. The members of the community had suggested the themes and a small steering group was formed out of the few most enthusiastic coaches to manage and direct the action. In addition to that, coaches were asked for feedback by using feedback forms and a separate survey. Some expert interviews and benchmarking were carried out as well.

The project produced a model or an example of how to organize and develop coaches’ community action. Coaches’ community action is an important part of every sports academy’s action, so other academies can make use of this study and its results in their action. The study results showed that coaches value the action and want to develop it, but they want to have more time for deeper conversation. To reach that goal people have to know each other better and the group should be divided into smaller groups or action should be organized on different levels.

Formal coaching education is organized in Finland on many levels. However, it has been proved that also informal education is needed. Informal education does not lead to a degree, but is actually considered to be an even more efficient way to learn. Regional coaches’ communities are one way to carry out informal coaching education, but the coaches have to feel that they belong to the group and a certain community spirit should be established. This project gave instructions on how to organize the action and what should be taken into account.