Sexual Harassment in the Dutch Hospitality Industry : From Students' Perspectives 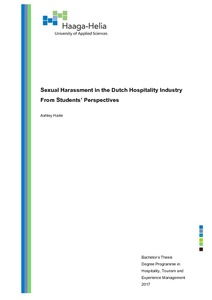 The hospitality industry is seen as one of the industries with the highest number of sexual harassment incidents happening at the work floor. Research discussed reasons for its occurrence, stating reasons as power, vulnerability, but also misinterpretation of one party to another based on body language. One may claim that this industry’s image and having the bedroom as work floor are playing important roles as trigger for sexual harassment to happen casually. To add, the division between sexual harassment initiated by guests and between colleagues is made here. Furthermore, despite that women are often seen as victims of sexual harassment, presence of male victims is noticeable. Nevertheless, most victims feel insecure or do not know where to go in terms of speaking up. Moreover, the Netherlands is scoring high in sexual harassment rates and researched argued that graduates of hotel schools in the Netherlands are leaving the industry with high numbers as soon as they experience working.

Based on the results, assumptions are providing the possibility to argue that the students participated in the research nowadays seem to be more tolerant towards lighter forms of sexual harassment being ‘inappropriate invitations to go out on dates’ and ‘disturbing questions about their private life’. They seem to know about the phenomenon of sexual harassment, although nine out of ten students did not discuss sexual harassment during their studies and/or study. However, most students seem not to reconsider working in the hospitality industry because of this risk. And even though nine out of ten students felt some sort of pressure or stress during social interactions with guests, almost half see themselves definitely working in the industry after graduating. Yet, earlier research suggested that 70 percent of Dutch hotel school students left the industry after graduation. Another contradiction between literature and this study was seen most respondents argued that the hospitality industry is not a gendered industry and only some occupations could be sexualized, while previous research assumes that there are more women working in the industry and sexualisation of this industry is an often occurrence.