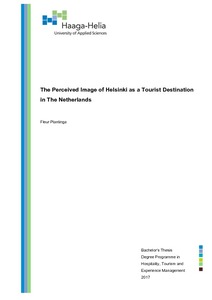 A positive destination image is essential for a certain place to be able to attract a sufficient amount of tourists. The images and expectations tourists have about a certain destination have been shown to be one of the key factors when selecting a destination for leisure pur- poses. The overall image one has from a particular region eventually might be favourable or unfavourable in terms of choosing a travel destination.

A quantitative method has been used in order to conduct the destination image research. A questionnaire, consisting of sixteen questions, was conducted among the Dutch population. The questionnaire consisted of open- and closed-ended questions, and it contained classifi- cation, attitude and opinion, and behaviour questions. As a result, a variety of data could be collected. The questionnaire results gave the researcher the possibility to look at various as- pects, including the age, the differences between people with knowledge of Helsinki and people who do not know anything about Helsinki, destination images in winter and summer season, and people who have visited Helsinki and people who did not visit Helsinki.

Overall, the Dutch population sample image Helsinki as a cold and snowy destination with many nature areas. Although the Helsinki Cathedral and the harbour are well imaged in their mind, there is concluded that Helsinki does not offer sufficient touristic sights and activities. In addition, Helsinki is seen as an expensive Nordic place and less popular than other Nordic capital cities. Helsinki as a tourist destination should be better known in the Netherlands and thus, better promoted. Important is to create a positive word-of-mouth, since the Dutch citi- zens’ friends and family that have visited Helsinki are of great influence for shaping their des- tination image. Word-of-mouth and social media are useful marketing tools that could help increase the awareness of Helsinki as a tourist destination in the Netherlands. In this way, Helsinki’s uniqueness, in comparison to the other Nordic capital cities, could be promoted.