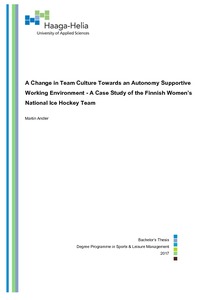 This study presents how the change in team culture has impacted the Finnish Women’s National Ice Hockey Team. The structure of the study is based on the self-determination theory, autonomy supportive coaching and change in team culture. The sub chapters’ focus on motivation, the coaches' and athletes' role within the autonomy supportive team working environment, autonomous goal setting and transformational leadership. The subchapter for cultural change is focused on the complex on-going process within the Finnish Women’s National Ice Hockey Team.
The aim of this study is to enlighten how the cultural change has been implemented and whether or not the environment is autonomy supportive in the Finnish Women's National Hockey Team. Participants in this study filled a questionnaire and were interviewed. Interviews were conducted over phone, Skype and Facebook Messenger. The questionnaires structure was built on the self-determination theory. The sample group was 21 persons. Participants consisted of 13 players and 8 staff members. All reached participants were interviewed following the structure of the questionnaire.
The results of this study show that the environment in the Finnish Women’s National Ice Hockey Team is autonomy supportive. The athletes three basic psychological needs, autonomy, competence and relatedness, are satisfied according to the study result. This can be considered as surprising since the project of change in team culture was so young. A clear structure was expected when striving towards the Finnish Women’s National Ice Hockey Teams’ set goals, but not a result this relevant to autonomy supportive coaching, where the three basic psychological needs are this clearly satisfied.
Because this study presents that the environment is autonomy supportive, further research should be considered regarding athletes' and staff members' well-being. Further research is recommended on players’ off-ice training because of the large amount of autonomy players have in the off-ice training.