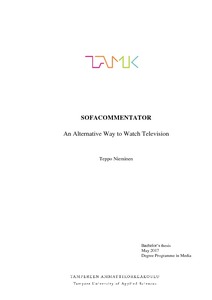 In 2013, Yle commissioned the creation of a concept which was to transform the way live television is watched. It was a plan for a service called Sofacommentator which would have allowed people watching television programmes to voice their own commentary over the program they are watching for other people to listen to. However, this idea did not materialise into a working service.

The purpose of this study was to investigate the history of live event commentary on media and Internet as well as to test the commercial potential of the Sofacommentator service. A simple prototype of the Sofacommentator service was created for testing. Data about the commercial potential were collected by conducting user tests where the test users watched a television program while using the created service with pre-recorded commentary tracks.

Creating a simple version of the service website was successfully done using a modified Wordpress theme and free versions of online radio hosts. The results of the user tests showed a positive response towards the general idea of the service and users told they would be willing to use the service were it available.