12-17 years old soccer players' experiences in their motivational climate and its association with their achievement goal orientation, motivation and perceived competence 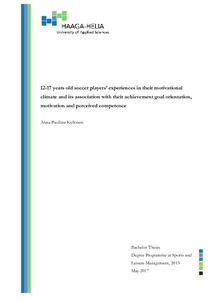 Motivational climate plays a big role in young athlete’s sporting career and the coach has an important role in creating it. The aim of this research was to study how 12-17 years old, female and male soccer players experience their motivational climate and is it associated with their goal orientation, motivation and perceived competence.

A total of 964 participants took part in this research, 286 female players and 678 male players. All participants were from some of the highest ranking soccer clubs in Finland. The data was collected in Sami Hyypiä Academy’s player development camps in 2015, where the participating players attended twice a year, once in autumn and once in spring. The participants filled out questionnaires regarding their perceived motivational climate, achievement goal orientation, motivation and perceived competence. The data from these questionnaires was then analysed using the SPSS bivariant correlation coefficient analysis, independent sample t-test and one way ANOVA t-test.