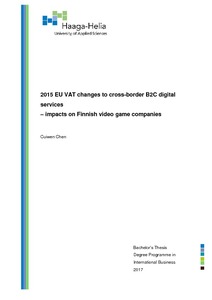 This Bachelor’s thesis looks at the 2015 European Union (EU) Value Added Tax (VAT) changes to cross-border B2C digital services. The overall purpose of the thesis is to reveal the impacts of the new VAT rules on Finnish video game companies.

The study is based on quantitative and qualitative methods. First, a link to a questionnaire was published in the Play Finland Facebook group, organised by Neogames Finland ry. and followed by most Finnish video game companies. The survey was valid for a month, but only one company filled in the questionnaire. Second, two half-structured interviews with the Financial Manager and with the external accountant of a Finnish video game company were conducted to obtain detailed information of the impacts of the new VAT rules.

In brief, the implementation of 2015 EU VAT changes to cross-border B2C digital services relieves the tax burden of most Finnish video game companies. This implementation does not hamper companies wishing to distribute their games directly in the B2C market.