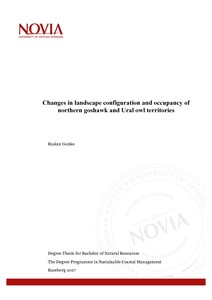 Landscape fragmentation is one of the processes strongly related to human activities. During this process, an area is divided into smaller pieces and usually, these pieces have different predestination. As a result, natural areas lose their connections, which are vital for animals and plants. Finland is mainly covered with forest that is also affected by landscape fragmentation. Thus, forest species are under threat and biodiversity can be reduced to a critical level. Monitoring of the biodiversity is usually a complicated and long process, but for facilitating research indicator species are often used. Examples of these are the northern goshawk and Ural owl. In this research, the relationship between this species occupancy and landscape configuration in Suupohja area was investigated and tested. A strong connection was found between Northern goshawk occupancy and the mature spruce forest. Furthermore, a connection between decreasing species population and increasing amount of low-stocking forest was observed. Changes in the protected areas in Suupohja were also studied for the period 2009- 2013. As a result, a decrease in human activities and an increase in the amount of mature forest due to natural growth were found, which confirms the security of this area and its name of protected areas.