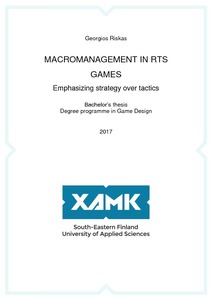 Strategy games have been introduced to the public in many different forms and video game is no exception. Real-time strategy (RTS) has been amongst the most popular strategy subgenres. It has gone through many changes and has both borrowed and lent gameplay elements from and to other genres throughout time.

The most common criticism of modern RTS games is that they lack the strategic depth (macromanagement) and rather emphasize in the tactics (micromanagement). While the mentioned criticism is a generalization, it contains - depending on the game - a smaller or bigger fraction of truth. Strategy is arguably present but is many times overshadowed by the demanding tactics.

The purpose of the present thesis was to examine if RTS games could be designed in a way that encourages strategic thinking without relying on heavy micromanagement on the battlefield. The study was qualitative and the main methods that were used were formal gameplay analysis and comparative analysis.

Four of the bestselling RTS games of all time were put under the scope of the research to detect traceable design patterns that can answer the research question. The games were Command & Conquer, Starcraft, Age of Empires II: The Age of Kings and Warhammer 40,000: Dawn of War.
After the formal gameplay analysis exposed many of the games’ patterns and mechanics, the comparative analysis pointed to the direction that should be followed. The analysis showed that specific mechanics have been used in the past towards the direction of emphasizing the macromanagement in RTS.