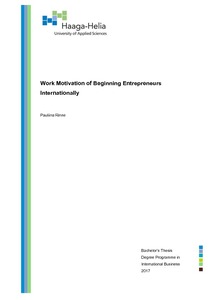 The purpose of this study was to research the work motivation of entrepreneurs internationally. The focus was on beginning business entrepreneurs and the goal was to find out what motivates the entrepreneurs to start a business.

This thesis was conducted as a desktop study, and it was a small meta-study comparing four original research articles about entrepreneurial motivation. The target countries of the study were Serbia, Turkey, Ghana, Kenya, China and Vietnam.

The research question focused on what motivates entrepreneurs to start their own business, and it was divided into two investigative questions. The first one focused on the top motivators of beginning entrepreneurs, and the second one on comparing the similarities and differences of those motivators.

The entrepreneurs were from micro- and small-sized enterprises, and all four original research articles used the same survey instrument developed by Hung M. Chu in 2001. The questionnaire results from the four research articles were compiled together and analysed against the theory base for the purpose of answering the research and investigative questions.

The results of the research show that the top motivator for entrepreneurs to start a business was to increase annual income. The number two motivator was different for all countries with the exception of Ghana and Kenya where creating a job for oneself was the number two motivator. In the other countries, securing a job and achieving personal satisfaction either through self-determination and autonomy or achieving goals as an entrepreneur were more important.

The biggest problems hindering the process of becoming an entrepreneur were found to be limited access to funding, high bureaucracy and complex tax structures.

Based on the results, it could be suggested that categorizing entrepreneurs based on being motivated strictly by a necessity or an opportunity ought to be reconsidered, and intrinsic and extrinsic motivators are not mutually exclusive. While most of the entrepreneurs had characteristics of necessity entrepreneurs normally motivated by extrinsic factors, they had nevertheless made a voluntary decision to become entrepreneurs that seemed to be supported equally much by the desire to achieve intrinsic satisfaction and rewards.