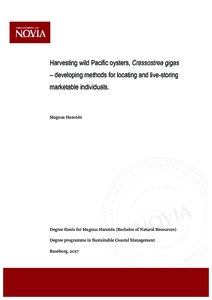 Invasive species has transformed marine habitats all around the world, and will likely continue to do so due to both natural and anthropogenic factors. Invasive species are usually seen as a threat and considered harmful, there are however also species that could be considered to have a positive impact. One of these species is the Pacific oyster (Crassostrea gigas), an oyster species native to the Pacific coast of Asia that recently arrived in the Swedish west coast. Local bodies have expressed an interest in creating a market of these Pacific oysters growing in the wild. In order to evaluate if such a market is possible a field survey was conducted to determine in which population densities most marketable oysters could be found. Further, a live-storage method was tested, lowering the oysters into different depths to ensure a fresh supply of oysters throughout the summer. The result shows an abundance of marketable individuals, with a slight decrease in number in higher population densities. The live-storage trial showed a positive outcome at the deepest depth (14m), where the oysters increased in both size and weight and the mortality level was low. The result indicates that a market of the wild Pacific oyster is possible, and that a live storage method would be a suitable option on the west coast of Sweden.