Introduction of Protractor as test automation framework for AngularJS applications 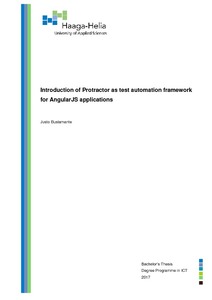 The objective of this thesis was to describe the introduction of Protractor as test automation framework in an AngularJS development environment.
This thesis was written in a diary-based format and contains journals reporting the weekly assignments and the challenges and solutions encountered during the eight weeks of the thesis-project.
Thesis-project was conducted at KiKo Oy, a Finnish middle-sized IT company from the language technology field. KiKo Oy had recently launched the DictionaryPlus service that is built with an AngularJS web stack. KiKo Oy stakeholders advanced that Protractor should replace RobotFramework –the test automation tool at that time– because Protractor is believed to best support Angular-specific locator strategies that allow to test Angular-specific elements without any additional setup effort.
The author works as Software Quality Assurance Engineer in KiKo Oy and has a solid understanding of the company’s business domain and its agile development practices. KiKo Oy’s CEO and R&D leader have commissioned the author to conduct this thesis-project.
This diary-based thesis describes, at a high level, the project’s sequential stages, such as infrastructure preparation, Protractor’s installation, tests scripting, tests execution, and project’s closure evaluation.
As result of the project, KiKo Oy stakeholders decided to withdraw RobotFramework from service and to adopt Protractor as the standard test automation framework for their AngularJS applications.