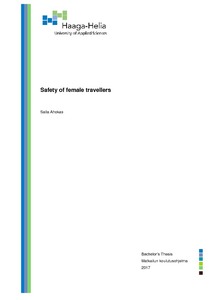 The aim of this thesis was to investigate how female travellers experience safety.The research questions were how female travellers could feel safer while travelling, what are the reasons on the sense of safety and insecurity, what kind of impact does safety have on decision-making process before trip as well as travel behaviour during the trip and what kind of impact previous travel experience has on the sense of safety.

The method for quantitative research was questionnaire in respondent-completion format. The survey was conducted in 16.02.2017-15.03.2017 by using Webropol. The 62 respondents were members of international women-only Facebook groups based in Vienna, Austria as well as personal travel contacts.

The results revealed that participants highly valued others’ opinions, whether it was reviews from other travellers, guidelines from authorities or advices from friends and family. Safety was rarely a reason to cancel a whole trip, although there were destinations participants did not feel safe to visit. Respondents mentioned they had felt unsafe at one point during their travelling but felt safe to travel in general. 18 out of 62 participants had refrained themselves from doing something because they had not felt safe to do so. Previous travel experience did not play remarkable role in the sense of safety. Company of others, staying in safe neighbourhoods, travel insurance, confidence and good preparation before trip made travelling safe for participants. The main reasons for unsafety were harassment, unwanted attention, fear of various of crimes as well as time of the day.

All in all, findings show that the one way to feel safer while travelling is preparation, such as background checks, knowledge of the destination and local language before travelling as well as interacting with other travellers and locals.