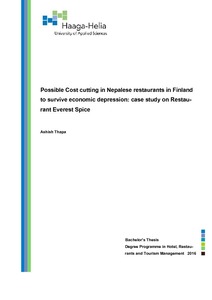 Number of pages and appendix pages
45+5

Globalization has multidimensional effects in various aspects of our social life and Food culture being an important asset of our social life; we are being able to feel the presence of globalization in this field as well. Finland has also seen the drastic change in its food culture in recent years after people from various cultural background started moving and residing here. Today, there are many restaurants throughout Finland depicting their original cultural identities representing from different corners of globe. Nepalese restaurants are also making a significant presence among the group of such multicultural restaurants established around Finland.

This thesis mainly focuses on the possible cost cutting measures that can be taken in Nepalese restaurants operating inside Finland based on a case study made on one of the Nepalese restaurants named Everest spice which is providing service in Kerava region. The study is solely made in this particular restaurant only but as food served, services provided and structure of many Nepalese restaurants in Finland are similar to each other’s, the case can be partially related with other restaurants as well.

Restaurant business is a very vulnerable business when we think about economic recession, it is most likely that people somehow try to save money by controlling their visits to restaurants during the time of economic depression. So, it is always better to be prepared for such situations rather than waiting for it and take actions then. The thesis has tried to point out such measures which can be immediately or later implemented to overcome unnecessary costs that are knowingly or unknowingly being paid within Nepalese restaurants in Finland. The thesis also has focused to emphasize on finding solutions or less costly replacement measures for such unwanted costs of the restaurants. The thesis has used the reference of transaction of Restaurant Everest spice as its study material but also has considered this to relate with other Nepalese restaurants functioning inside Finland.

Cost cutting here doesn’t necessarily mean compromising with quality. Service business has to maintain its quality in order to grow its business and it is not reliable to focus on cost cutting by destroying quality alongside. This thesis also has taken this idea into consideration and tried its best to explore such measures which doesn’t compromise or less compromises with the quality of restaurant. It also has studied on creating and maintaining good brand image of the restaurant with minimum amount of investment.