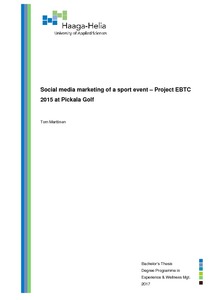 This is a project type thesis about the social media marketing of European Boys’ Team Championship 2015, which was held at Pickala Golf Club on July 2015. The tournament is held annually in one of the participating countries. The purpose of this thesis project is to create a marketing plan for social media to promote the tournament and implementing it into practice. In addition to that, the progression of the tournament is reported and discussed based on the results. At the end of the thesis, the thesis process and the learning outcomes of the project are discussed.

The Implementation part of this thesis consists of the work that was done during the tournament period and the written report of the planning and implementation of the plan into practice. In the planning phase, goals of 400 likes and positive feedback from tournament staff and participants were set, followed by an action plan on how to reach these goals. In the implementation of the product, a large amount of visual materials was captured, edited and shared on the chosen channels.

In modern day marketing, the transition from traditional medias to Internet social media has shaped the field of marketing in more ways than just as a change of an outlet. The audience expects to be engaged and feel welcome to participate in the conversation, rather than being rendered to being passive listeners of the marketing message. This has given the most competent marketers an advantage over their peers. Mastering marketing in social media allows marketers to impact the target market in a more profound way than traditional marketing does on an emotional level. Emotional involvement is one of the largest factors guiding the customers’ decision making. In addition, marketing in social media can be very cost efficient if done right.

The results of the thesis are discussed based on the goals set and the overall development of the project. The page fell short of the 400 likes by 93 likers. Regardless of that, the positive feedback and quality of work, along with the tangible evidence of success with over 12000 people reached in the day of the final, suggest that this project was successful in its purpose. The social media marketing project enhanced visibility of the event in a very cost-efficient way.