An Investigation into how Character’s Visual Appearance Affects Gamer Performance 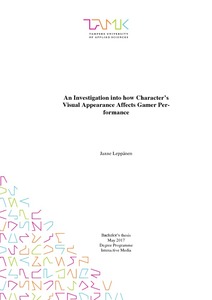 The purpose of this thesis was to investigate how a gamer perceives the playable character’s visual looks in an FPS (first person shooter) type of computer game. The main focus was on how this affects immersion and especially the gamer performance while playing the game. The goal was also to explain the concept of enclothed cognition and its use in the thesis to support the research.

A series of tests was set up for multiple test subjects with the purpose of proving that the playable character has a psychological effect on the gamer. For the test a custom game in Blizzard’s game Overwatch was set up and a screen recording of each test subject was collected. A key element to the test was altering the visual looks of the character between the tests. The test subjects were also asked to fill an answer form after the test.

The results were affected by variables not taken into consideration and thus the test ended up being inconclusive. Changes in the results are visible, but proving if they occurred by a random chance or not still needs verification. The conclusion part further discusses the needed changes in the test setting.

The results also suggest that most gamers are not conscious of their avatar appearances in this game. Most of the test subjects felt that their performance was not affected during the test or by the changes in the game environment. Some subjects admitted that playing with their favourite character might have some effect on their playing style and/or performance.

Further testing should be done with the help of game companies. As a result there might be a larger breakthrough in terms of gamer psychology and guidelines on character design. I would like to test this in multiple different game genres and playing styles. There are game companies such as Valve who could test this on visual modifications of weapons and its psychological effect on a gamer performance