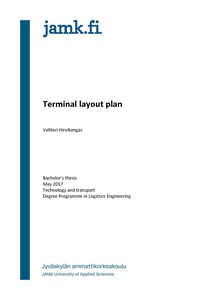 The thesis was implemented at the terminal of Posti in Jyväskylä during the spring of 2017. The terminal's current layout had faced only minimal changes after it was built in 2008. During the years, however, the terminal had faced changes in its processes due to the expansion of the terminal, changes in volume and acquisition of new customers. The purpose of the thesis was to create a layout plan which would improve the effectiveness, material flows and safety of the terminal. Researching possibilities of combining transports between the freight and postal sides of the terminal was also needed.