How to Write a Business Plan for an Independent, Narrative, Feature Film : Case: "Get Up, Get Out” 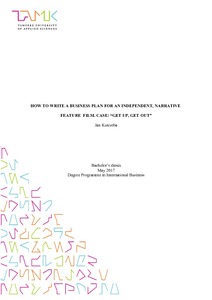 The author of the thesis has worked in film industry in the United States in various positions since his graduation from the Stella Adler Studio of Acting, New York, in 2012. Researching business planning in independent feature filmmaking was a natural extension to what the author already does in his professional life, and the commissioned work was a perfect match for the thesis.

Based on both the survey and secondary sources, the author concluded that business planning is crucial and widely used in independent feature filmmaking in the United States – especially when the main funding source is other than the filmmaker him/herself.

For further studies, the author recommends using a much larger focus group when conducting a questionnaire, as the response rate was only 4%. The author would find further studies on independent film profitability correlating with the quality of business planning very interesting and useful. However, these findings are out of the scope of this thesis.