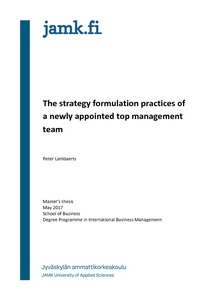 Strategic management is one of the core responsibilities of Top Management Teams (TMT). Unlike established TMTs, newly appointed TMTs may lack the expertise and the routines for effective strategy development. Little is known about how such teams engage in strategy making, and how well they succeed in formulating effective strategies. While this is a common situation, for instance, when high-growth SMEs start adopting more formal strategic management processes, it has received only limited attention in strategy research.
Based on the strategy-as-practice framework, this study intended to gain insight into the practices that newly appointed TMTs employ to formulate a new strategy and into the effect of these practices on the formulated strategy. A group of nine managers, who were promoted from operative roles to form a new TMT, was followed for a seven-month period. Qualitative data were collected through participant observation and face-to-face interviews. Document analysis was used for the analysis of the formulated strategy.
The results of the study suggested that cohesion development in a newly appointed TMT may hinder strategic exploration and ideation practices. Newly appointed TMT members also appeared to limit broader organizational participation in the strategy process. Moreover, being promoted from operative roles to strategic roles, TMT members tended to focus on internal matters. As a result, the strategy formulated by the newly appointed TMT failed to address the firm’s competitive position, but, instead, emphasized internal change. It was proposed that newly appointed TMTs should establish group cohesion and develop proper collaboration practices before engaging in strategic projects.
The findings of the study contribute to the knowledge on the effects of TMT tenure and group cohesion on strategy formulation. Further research could validate the findings in strategy implementation processes and study the impact of organizational collaboration on strategy formulation.