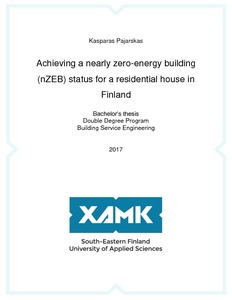 The objective of this thesis is to research the feasability of nZEBs as an option for residential housing in Finland. Secondary objectives include determening the best type of heating system as well as renewable energy technologies for such a building. An additional objective is to determine whether the best appraoch for an nZEB in Finland is to prioritize energy efficiency or energy generation from renewable energy systems.The initial hypothesis is that nZEB energy consumption levels can be successfully reached in Finland only by adding a moderate amount of renewable energy generation to already existing and known to be cost – optimal Passive House or Very Low Energy House standards.
Methods of this research included finding out what technical solutions, taken both from the Passive House and Very Low Energy House standards as well as recommendations for nZEBs in cold climates should be applied when designing a nZEB in Finland. After this was done, different nZEB concepts have been created and their energy performance simulated using IDA ICE 4.7.1 software. In order to meet the objectives of the thesis, building concepts with different thermal insulation levels, heating systems and renewable energy technologies have been compared, totaling up to 18 different building concepts. Additionally, all of these building models were simulated in three different parts of Finland - Southern (Helsinki), Central (Jyvaskyla) and Northern (Sodankyla).
The results of the simulations revealed that nZEBs are indeed an optimal choice for residential housing with today’s technological development. This is known as the nZEB performance levels have been reached only by adding moderate amount of renewable energy technologies to already widely used and known to be cost – optimal Passive House and Very Low Energy House standards. It was not expected, although, that all of the created building concepts, even with insulation levels representing only the minimum Finnish National Building Code requirements have reached the nZEB energy performance levels. The best heating system choices proved to be District Heating and Ground-Source Heat Pumps while the best renewable energy technologies proved to be Photovoltaic cells, Solar Thermal collectors and if counted, the same Ground Source Heat Pumps.
After attaining such results, a conclusion has been made that nZEBs are a perfectly viable option for residential housing in Finland. However, it was speculated that such good results might not have been achieved if more variables would have been analyzed in the simulation and if the requirements for nZEBs in Finland would be mores strict.