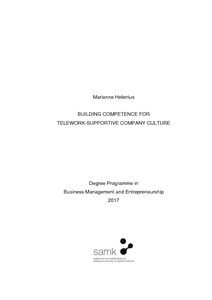 The purpose of this master’s thesis was to verify the suitability of telework for the case company by gathering experiences from a telework pilot project. The objectives were to find out, from the perspective of both employees and supervisors, what were the observed benefits and challenges, what was the effect on work motivation, commitment and company image, and what methods were considered practical when preplanning the tasks and following the results of telework.

The topics discussed in the theoretical part concentrated on telework-supportive company culture, developing of leadership practices, trust in the key role for successful telework, and the nature of the work suitable for teleworking. Also implementation issues were looked into, as well as the known pros and cons of telework. The framework agreement that forms the basis for telework in EU – and consequently Finland – is shortly mentioned.

With this research, five main pain points came to light requiring further attention. As an equity issue, telework should be allowed for everyone without ruling out certain groups on company level. The process of setting goals and indicators, and following the reached results, should have a bit more systematic approach. The aforementioned process should also be adequately clear and fluent. The closest supervisors should be allowed to guide telework more freely however within certain, not-so-strict companylevel guidelines, and building mutual trust more actively is highly recommended.

Otherwise telework was a success and was received very well at the case company. It was strongly supported by both employees and supervisors: it improved the personnel’s motivation and job satisfaction, polished their image of the company, and increased their commitment to both company and work.