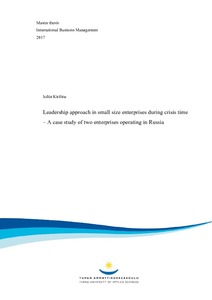 Leadership performance has always been an important factor of company success and nowadays this topic gets much attention.
The present study aimed at investigation of leadership style and peculiarities during crisis time with special focus on small size enterprises. Within framework of the study several definitions of leadership were considered and reviewed. Furthermore the most prevalent leadership theories (including trait, contingency, behavioral theories as well as transactional and transformational leadership theories were reviewed and discussed. The study provides a review of the relevant literature on the cultural orientation (Russia) and its impact on leadership approach, types of business crisis and crisis leadership approaches and identifies leadership competences relevant to that topic.
Two small size enterprises representing food trade sector and business travel sector (number of employees 6-11) were selected as case study examples. Study was performed with focus on leadership style and core competences. For this purpose a questionnaire was to collect empirical data on leadership and evaluate leadership style and competences. Focus was paid to differentiation between transactional and transformational styles, analysis of autocratic/democratic leadership behavior and evaluation of task- and human leadership orientation. Special emphasis was made on evaluation of core leadership competences relevant to crisis management. As a result of that, analysis of the questionnaire data on competences enabled identification of strong and weak positions of leadership with respect to crisis management. Based on the analysis of results, several points of attention and action for leadership were determined and relevant improvements suggested.
Comparative analysis of case study Companies A and B revealed similarities in leadership style and behaviors. It was found that in both enterprises transactional style, autocratic behavior and task-orientation of leadership prevailed. Plausible explanation for these similarities was hypothesized and discussed. Potential contributions from cultural, crisis-caused and knowledge-caused factors were discussed.