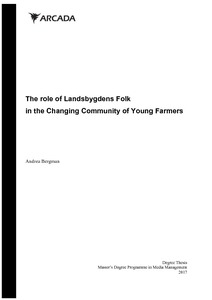 Many news consumers are abandoning print media for digital news, especially so-called Millennials, people under 35 years of age. The newspaper Landsbygdens Folk, targeted at Swedish-speaking farmers in Finland, is exploring ways of better reaching and serving the younger readers. To understand how young farmers see their community and the role of Landsbygdens Folk within it, ten qualitative interviews were carried out among young trustees from the farming community. The data was analyzed using thematic content analysis in order to answer the research question “how can LF help strengthen the community of the young farmers, today and in the future?” The most important themes of the interviews were sense of belonging, adaptation and need for information. The young farmers feel a strong sense of belonging to their community, with Landsbygdens Folk acting as a provider of information while easing adaptation within a society that is constantly changing. The farming community is also changing, with social media playing an important role in validating identity and offering peer support. Landsbygdens Folk is still seen as relevant and trustworthy by the young farmers, but in order for the newspaper to better serve them, more efforts need to be made to integrate the readers as co-creators of news. By listening to the readers and adapting along with them, the newspaper can make sure that the topics covered are of importance to the farmers, facilitating their work and strengthening their community today and in the future.