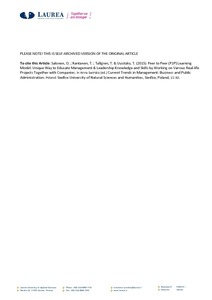 Team work is also at the centre stage of a project. The project team is based on a group of people. The size of the project team can vary notably. Every person in a project team has their own role, tasks and responsibilities. The ability to work in a team is unquestionable in order to complete a project successfully, also every team member responds to their own tasks and ensures that those tasks are done carefully and according to the schedule.

It is also wrong to assume that projects are only used in the business world and in big government agencies. This explains that projects can be utilized anywhere. And because of that there are many different types of projects. These can be, for example, company internal development projects or a charity event developed by a community.