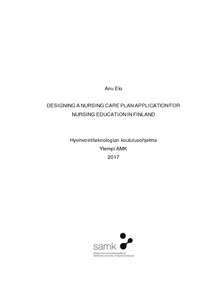 Documentation with electronic applications requires nursing competences and therefore nursing students need to learn the skill during their studies. There are several electronic medical records (EMR) in use in health care, which allow nurses to make nursing care plan according to the nursing process and care classifications. Nursing students may train documentation skills with those during their clinical practice periods but there is not a unique educational application, which could be used in theoretical nursing courses and especially in nursing simulation laboratories.

The aim of this study was to draw up a requirement analysis for an educational nursing care plan application for medical and surgical nursing courses in Finland. The developing process of the nursing care plan application comprised of literature review, software and paper prototype designing, validation of the prototype and the designing of the final prototype version. The functional and non-functional requirements for the application were produced by content analysis. After the application prototype was designed in verbal and illustrated presentation, it was evaluated in four validation meeting groups. Nursing students (n=3), teachers (n=5), technology personnel (n=2) and a nurse (n=1) were testing the prototype with talk aloud method. As a result, from these meetings final version of the prototype was designed. The paper prototype enables encoding, testing the prototype and further technological development. Afterwards, it is ready for national and international assessment and possible dissemination.

The thesis was produced in collaboration with EU Master Care and Technology Consortium.