Chinese SME Entrepreneurs in Finland From a cultural perspective 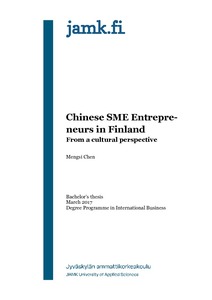 China presently holds the position of the second largest investor world-wide, and its external levels of foreign direct and indirect investment has become a global phenomenon. Besides Russia, China is the second biggest trading partner of Finland. This research reports the described experiences of a small sample of Chinese entrepreneurs who are doing business in Finland. The research describes cultural aspects from both Chinese and Finnish cultural perspectives, and therefore is beneficial for current and future Chinese entrepreneurs in Finland.
Five in-depth interviews were conducted for the study. The participants are Chinese entrepreneurs who started their business in Finland. The main findings of the study are: Personal motivation is an essential characteristic needed for starting and running a business in a foreign land; Challenges such as language, finance, law and regulations are important parts of the business process that must be understood and complied with; Chinese entrepreneurs are typically highly enthusiastic, and their persistence constitutes an important coping strategy; and Confucianism, one of the traditional Chinese philosophies, drives many Chinese entrepreneurs in their business life and personal life; The well-known typical Chinese networking concept of Guanxi was not described as being that important at the early stages of starting a business in Finland because the Finnish system is quite fair and transparent. How- ever, the concept of Guanxi did emerge when running the business.
For future develop of the company, certain concerns about the economy and policy were reported, but all the Chinese entrepreneurs are optimistic about their business. The report concludes with recommendations about the future study of entrepreneurship in Finland by Chinese immigrants.