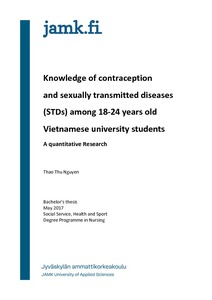 With the experiences in the growth of economics and cultural diversity, sexual health behaviors of young Vietnamese have also changed. This change addresses the need of knowledge about contraception and sexually transmitted diseases (STDs) in order to promote public sexual health.

This study aimed to measure the knowledge of contraception and STDs among Vietnamese university students aged 18-24 years old. The result of the study was meant for educational institutions to know the students’ level of knowledge about the topic thus to plan for extra education and training for it. The study was conducted using quantitative methods in order to collect a large number of cases for certain aspects in a relatively short time frame and to produce generalizability.

Data was collected via a quantitative questionnaire, which composed of 29 questions. The questionnaire was built online (Webropol) and answered by 250 students, from 2 universities in Hanoi, Vietnam within 2 weeks. The author used Webropol as a tool for data analysis. Data was presented in percentage (%) and total number of objects (N, n) to display frequency distribution of the variables and draw comparisons.

The collected data showed that the group had relatively poor knowledge of this topic. Female population performed better in the knowledge of contraceptions whereas male had more concrete knowledge about STDs. Lack of education about the matter from family, school and health care institution was acknowledged. Even though most participants admitted getting the information from Internet, they wished to learn more about this matter from other sources e.g. sexual partners.

As the study was conducted for educational purpose, it might serve as a tool for institutions to study the need for education for young people to promote safe sexual health. The scope of the study was limited to only universities in a particular region of the country. Studies that combine attitude and knowledge and other social-psychologic factors of the surveyed group might give more insightful findings of the topic.